An investigation carried out by a team of renowned scientists in charge of David Nutt shows that in the United Kingdom, as well as in many other countries, there is no relationship between the classification of drugs and the damage they cause. So, could the damages caused by drugs be calculated, depending on the result, so that we can catalogue them? It is a complicated equation. This team of scientists has found 16 different ways in which drugs can harm society. Nine of them are damages inflicted on the consumer and seven others affect society. So for any drug it is required to study 16 groups of different data so it is quite complex.

Currently in Spain the legislation on drugs separates the substances into two groups, differentiating those that cause serious damage to health and those that do not cause such serious damage, without specifying what harm they cause and without specifying which drugs are treated and therefore, without follow a scientific criterion. Research such as that of David Nutt promotes that the citizen know the risks of each substance and that the law is based on the knowledge that science contributes in this respect, every day more extensive, that we have on drugs. 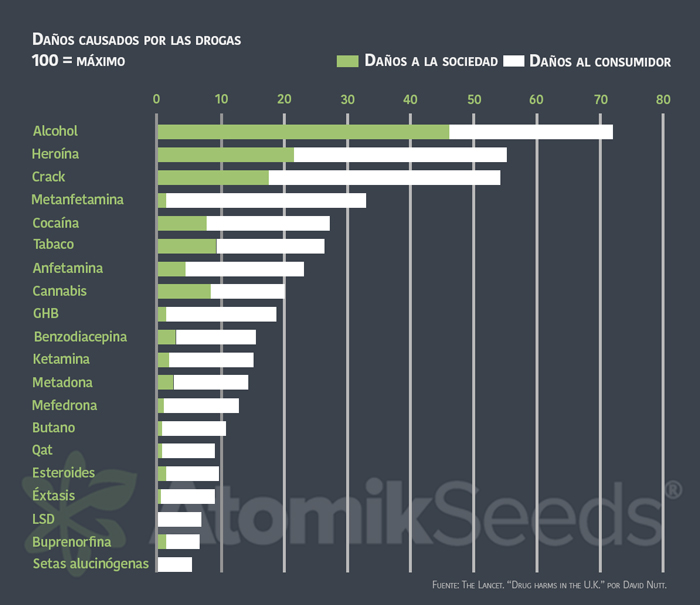 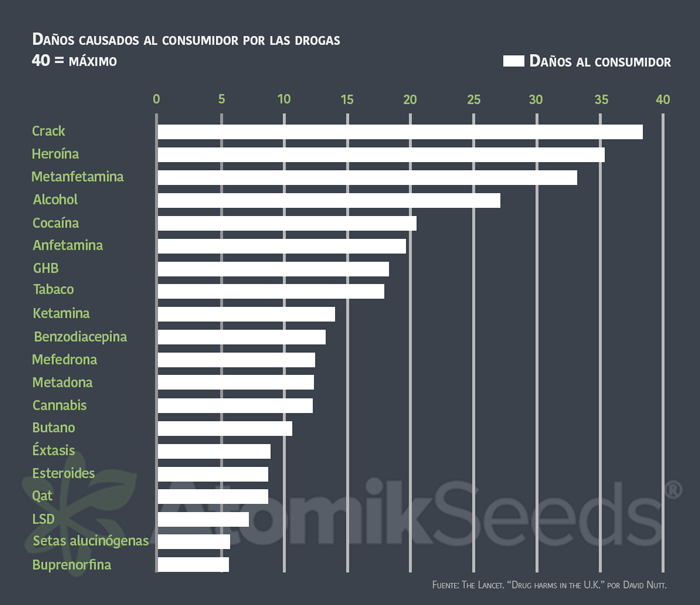 But what would a new classification be like according to this doctor's analysis criteria? There are natural borders, says Nutt, there are two very popular drugs that are legal. One is alcohol and the other is tobacco. Now, if a drug is more dangerous than alcohol, see heroin, crack, cocaine or methamphetamine, those drugs should not be sold. And if a drug is considered scientifically less harmful than alcohol, in a society that allows this drink, there is no point in prohibiting it. There is no point in prohibiting certain drugs that are safer than alcohol, many people resort to alcohol when they have no alternative and now that cannabis is legal in part of the United States and Spain, with the cannabis clubs, it is seen that many people switch to cannabis, which is safer. That is why the border of legal and illegal drugs should be alcohol, regulating less harmful drugs than alcohol in the same way that cannabis clubs do, that is, with regulated access but without a free market.

We have been unfair to cannabis, says David Nutt. Most governments were not interested in controlling cannabis, but when the dry law was abolished in the USA there was a large contingent of policemen who could remain unemployed. That is why the head of the anti-drug agency decided to convert cannabis into a dangerous drug that had to be prosecuted and in order to justify the existence of this police force they exaggerated the damage caused by cannabis and focused mainly on Mexico and over the importation from that country.

A posteriori would be included in the United Nations Convention on Narcotic Drugs of 1961. Most countries opposed the illegalization of cannabis but there was a lot of pressure from the USA and also from Egypt to be included in the conventions. Once something is declared illegal it becomes the target of those responsible for enforcing the law such as the police or customs officials and cannabis is an easy target because it has many consumers, because you can smell it and because it is quite bulky.

Which drugs should be banned and which ones should not be? How to explain to people the dangers and benefits of drugs? How to achieve a balance between the benefits and dangers of drugs? Until now for most of the drugs we have only focused on the risks and if they posed any danger they were simply prohibited, thus causing two consequences:

On the one hand, people have been forced to look for alternative drugs to circumvent the law, so the problem has sometimes been aggravated. On the other hand, research has been hampered, for example, when LSD was discovered in the 1950s, it began to be used to help understand how the brain worked and to help treat patients with terminal cancer. It was then when the young people began to see it, a social change took place and consequently the government prohibited it and the investigation was paralyzed. So, during the last fifty years there has been no research on this type of drug, although allowing its study could answer one of the most important questions about the functioning of drugs in the brain, that is, about how drugs change the conscience.

Today LSD should be a drug cataloged below the limbo of the dangerous with respect to other drugs. But this is extremely difficult, because for governments, once a drug is outlawed, any change in legislation or attempt to change the legal status of certain narcotics is a sign of weakness. In this way it goes from being a scientific argument to becoming a moral or political issue and we all know that politicians have a hard time admitting that they are wrong.

The traditional classification of drugs accepted by the government and politicians in the United Kingdom, where the drugs listed in section A are very harmful drugs such as heroin and cocaine and also within this section are other non-harmful drugs such as LSD and the hallucinogenic mushrooms. So in the United Kingdom drug legislation does not conform to current scientific knowledge. Class A drugs are supposed to be the most dangerous, class B drugs are dangerous, and group C drugs are less harmful, but for political reasons in that country they are quite mixed.

In addition, this psychopharmacologist says that alcohol, tobacco and LSD, ecstasy and cannabis should be included in this group. Drugs in whose positive effects or in whose potential we never think, says David Nutt and bets to re-investigate these substances. For example, ecstasy is a very useful drug for people with disorders caused by stress, chronic stress. Silocibin, another psychedelic narcotic is useful against migraines and LSD is very useful to treat dying patients, it helps them face the transcendence of death. Currently what is done with them is to poison them with opioids, so their mind is already dead, they die without really knowing what is happening. Regarding cannabis, more and more discoveries are made regarding the clinical benefits that cannabinoids can have to treat certain ailments and chronic diseases such as epilepsy, rheumatism, insomnia, etc.

Finally, David Nutt said that equestrian sports were worse than some drugs. As a specialized doctor treating patients with drug addiction, that is, a psychopharmacologist, he is often interested in using illegal drugs such as amphetamines to help patients with brain damage. He has treated many patients like this. He once treated a 37-year-old woman who had suffered a horse fall that had caused a brain injury changing her personality, causing her to lose her job, her husband, her children... With this case he began to think how dangerous it was to ride horse and discovered that doing it, especially if you participate in races or jumps, is more dangerous than taking drugs like ecstasy. There are more people who hurt themselves or who could harm themselves by riding horses than by using certain drugs. If you talk to riders, everyone knows someone who has died or who has broken his back or who has suffered some type of serious injury when falling off the horse.