BBVA, Bankinter and CaixaBank have been the three banks that have launched themselves to invest in the asset known as green gold. According to economists, it is a risk investment for these entities because the corporations in which they have invested are recently created.

For its part, BBVA has disbursed nearly three million dollars among the three largest producers in the world, all of them Canadians. Canopy Growth, Aphria and Aurora Cannabis. The latter has grown since 2016 no less than one thousand five hundred percent. 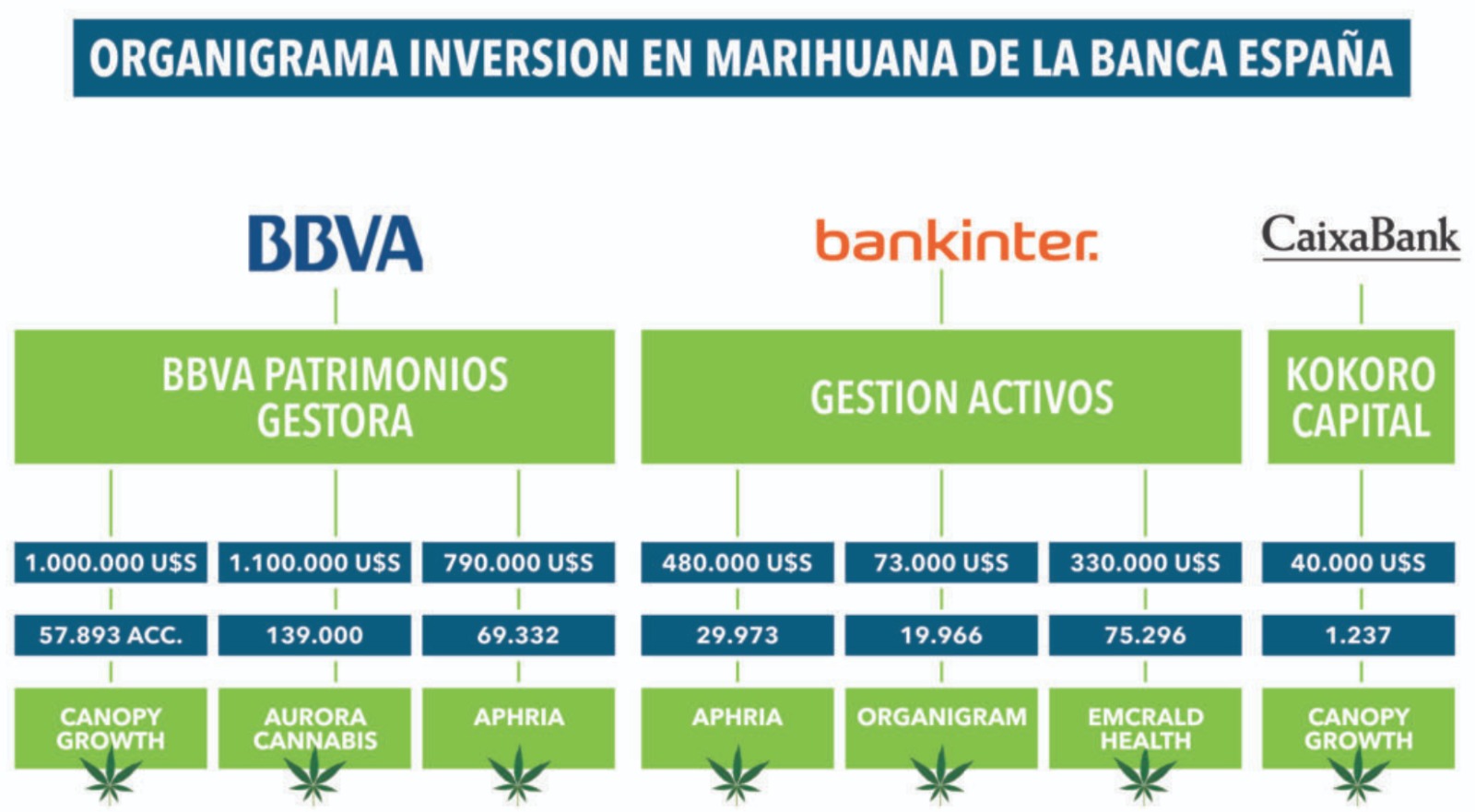 What is promoting entities that bet on this business is because more and more countries are joining the legalization of medical or recreational marijuana. This regulatory movement has its origin in California 1996, being the first state of Uncle Sam to regularize medical marijuana. Twenty years after this achievement for cannabis came the regularization of recreational consumption in the same state. Currently in the USA medical cannabis is legal in twenty-nine of its states while recreational cannabis in only ten. Canada is expected to legalize recreational consumption in the summer period of 2018, specifically on July 1 becoming the first developed country to tear down this wall for the world of cannabis. For its part, Uruguay has been the first country to fully legalize marijuana but with certain restrictions. The projects of different countries around the globe are ambitious and are already underway, many who want to take a part of this cake seeing how countries like Canada are putting their boots thanks to green gold.

Saving the distances, we must remember that in the USA the alcohol business was also illegal at the time and today generates billions of dollars.

On the other hand, not all banking entities support this business, in fact, Banco Santander has withdrawn those bank accounts that are related to the sale of therapeutic cannabis in pharmacies in Uruguay. President Mujica made clear his disagreement alleging that this decision is benefiting drug trafficking and that a law emanating from the Uruguayan Parliament is also curbing administratively.

The entrance of the business of cannabis into the American market took place in 2016. What is surprising is that it has taken so long since cannabis moves millions of dollars in the US and the big investors have not wanted to miss the opportunity by creating large corporations that are already listed on the stock exchange.

The cannabis business not only generates a lot of benefits for investors and owners but also creates a large number of jobs due to the low level of robotization that currently exists in this market.

Knowing that in the not too distant future marijuana will jump once and for all the wall of legality, the economic augurs bet to go integrating this business as the tobacco or alcohol business is currently integrated, since like these, the Marijuana has its usual consumers. It is estimated that if cannabis is now legalized at the federal level in the United States, the cannabis business could generate a value of ten billion dollars by the beginning of the 1920s.

Turning to the statistics, if we take a look at an economic period of two years from now, companies and cannabis corporations that operate on the stock market have shot their rates in a phenomenon that could be called the green gold fever.

The only one that currently exists in relation to investment in this type of business is the associated risk, since the regularization of this sector will not be an easy task due to political and legislative implications.

In any case, it is known all over the world that cannabis will be legalized sooner or later, what is not known is when.